Chlorophyll fluorescence occurring in chloroplasts can give vital information about plant processes and status at the cell, leaf, individual, and regional scales. It is possible to measure this physiological phenomenon by a wide range of means, from portable handheld devices to satellite imagery. It is versatile enough to have crucial crop and natural ecosystem management applications.

Chlorophyll-a absorbs light that is partly used in photosynthesis (photochemistry) and partly emitted as heat. The portion of the absorbed light transmitted back as light is called fluorescence and is measured, even if it is only about 2% of the total incident light. Chlorophyll-a fluorescence occurs in the red and far-red wavelengths of light, see Figure 1.

If there is more photosynthesis, there will be less fluorescence and heat loss. 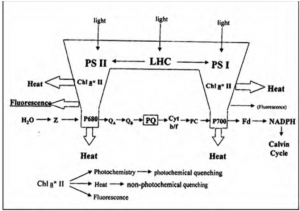 Chlorophyll is the green-colored pigment-protein molecule in chloroplasts, found in the leaves of lower and higher plants. The pigment exists as part of two photosystems, PS I and PS II, that form part of the light-harvesting complexes (LHC) and are present on the thylakoid membrane of the chloroplasts. Chlorophyll-a is found in both photosystems along with associated molecules, including chlorophyll-b. The reaction center of PS I is Chl-a (P700) which absorbs light at 700 nm, and the reaction center of PSII is Chl-a (P680) which absorbs light at 680 nm, see Figure 1.

Though fluorescence occurs in both PS I and PS II, the contribution from the former is not significantly high and needs to be addressed.

The photons absorbed by PS II are used to split water and form oxygen and electrons. The latter is passed along in the electron transport system in PS II, to the next carrier (QA) or primary quinone acceptor of PSII, in a process called photochemical quenching. When QA has accepted an electron, it is “closed” and cannot accept any more electrons until the electron is passed on to the next acceptor, QB. Ultimately the electron is passed on to the PS I, which is used to reduce NADP+ to NADPH2. Carbon dioxide (CO2) is the final acceptor of the electrons in the process of photochemistry or photosynthesis. 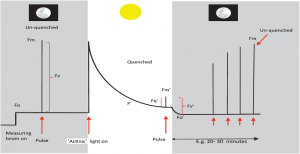 Figure 2: “A ‘typical’ fluorescence trace of the type that is repeatedly used to simplify the principles of chlorophyll fluorescence and provide an explanation of how we can derive important information about the performance of PSII by comparing fluorescence levels whilst exposing the leaf to a combination of actinic lights (i.e. light that drives photochemistry and photosynthesis), darkness, and a series of saturating pulses. This is based around the principle of separating the photochemical and non-photochemical components,” Murchie & Lawson (2013). (Image credits: DOI:10.1093/jxb/ert208)

At night and in the darkness, there is no non-photochemical quenching /heat loss; when a low-intensity measuring light strikes the leaves, the chlorophyll is excited, but there isn’t enough electron transport, so a minimum fluorescence (Fo) is recorded. A brief saturating pulse of light produces maximum fluorescence (Fm). The difference between Fo and Fm is Fv or variable fluorescence. Fo′ is the light equivalent of Fo and is measured after actinic light is switched off.

Fv/Fm is used to calculate the quantum yield of PS II chemistry or maximum photosynthesis and is usually ~0.83. Stress that affects the photosynthetic apparatus lowers this value.

When actinic light is applied, there is high fluorescence, followed by quenching by photochemical (photosynthesis) and non-photochemical (heat) events to reach a steady-state F′ in around twenty minutes. A saturating pulse administered during this time gives Fm′ or maximum fluorescence in the light phase. However, this is usually less than Fm as light is also lost as heat.

The operating efficiency of PS II photochemistry (or light used in photochemistry) is recorded in the light phase and does not require a dark phase measurement. It is calculated as Fq′/Fm′, where Fq′ is the difference between Fm′ and F′. These changes were first identified by Kautsky et al. in 1960 and named the Kautsky effect. Table 1 shows a brief list of parameters and the equations to determine them based on the Kautsky effect. 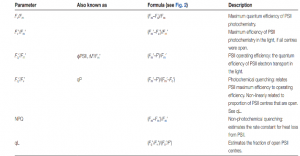 The intrinsic factors that affect chlorophyll fluorescence are many and are closely related to environmental changes.

Stomatal opening: When stomata open and let in carbon dioxide, there are more sinks for the electrons so that fluorescence will decrease. So all external conditions that close stomata will increase fluorescence.

Abscisic acid (ABA): The production of this hormone will close stomata and increase fluorescence.

Biochemical processes: An increase in the oxygenase activity of RuBisCO, due to water deficit in leaves, will result in less carbon fixation or photosynthesis. Therefore chlorophyll fluorescence will increase.

Light: During the night, there is no fluorescence in the absence of the light-dependent phases of photosynthesis.

Shading: Tree canopy or any neighborhood effects that cause shading will influence incoming light and change fluorescence.

Pest and diseases: Any factors that disrupt electron transfer will affect chlorophyll fluorescence.

Abiotic stress: When abiotic stress increases the activity of alternative electron sinks, for example, through the Mehler reaction and cyclic electron transport, chlorophyll fluorescence will decrease.

Importance and Relevance of Fluorescence

Chlorophyll fluorescence can evaluate changes in PSII photochemistry linear electron flux, and CO2 assimilation. These processes can shed light on plant responses to their environment, ecological diversity, and genetic variation.

Since changes in chlorophyll fluorescence are associated with PS II photochemistry, it estimates the photosynthetic rate.

Estimating fluorescence is usually done with Infrared Gas Analysis or spectroscopy to measure changes in photosynthesis. The photosynthetic rate can be calculated at the leaf or plant level or across larger scales using imaging.

Chlorophyll fluorescence occurs in the light range of 650 and 800 nanometres with two peaks corresponding to red (687 nm) and far-red (760 nm) wavelengths.

When leaves are damaged due to drought, pests, or diseases, more red light is emitted by leaves, and the value of the ratio increases. This ratio is widely used in crop and forest sciences research to detect and evaluate abiotic stress of various kinds, such as temperature extremes, ozone, heavy metal pollution, nutrient deficiency, UV radiation, light intensity, salinity, etc. See Figure 3.

Imaging is used to map chlorophyll fluorescence of agricultural and horticultural fields in precision farming. Combined with computer technologies, machine learning, and modeling, it is one of the techniques used to estimate photosynthetic rates to judge crop growth and productivity and detect the extent and intensity of abiotic and biotic stress. In addition, these estimations are used to make variable rate applications of irrigation, fertilizers, and treatments. 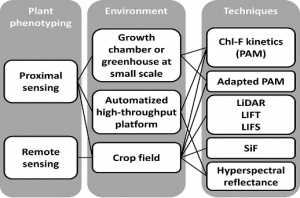 Chlorophyll fluorescence measurements at small and large scales are used for a wide range of applications in agriculture, forestry, ecological studies, and climate change action, such as:

● Estimating the photosynthetic efficiency of algae for energy production

● Screening for cultivars whose photosynthetic rate is adapted to extreme environments

● In precision forestry to monitor productivity and stress

There are small hand-held tools, such as the CI-510CF Chlorophyll Fluorescence Module, which can be used with the CI-340 Handheld Photosynthesis System to provide simultaneous estimations of fluorescence with photosynthesis, and other related physiological processes like stomatal conductance. The tool manufactured by CID Bio-Science inc. gives precise results within seconds and is ideal for laboratory, greenhouse, and field estimations research. Since there are ten different-sized leaf chambers, a wide range of species can be measured. Chlorophyll fluorescence is a non-invasive measurement that is an easy and cost-effective indicator of photosynthetic processes and plant responses to environmental change.

Haworth, M.R., Marino, G., & Centritto, M. (2018). An introductory guide to gas exchange analysis of photosynthesis and its application to plant phenotyping and precision irrigation to enhance water use efficiency. Journal of Water and Climate Change. 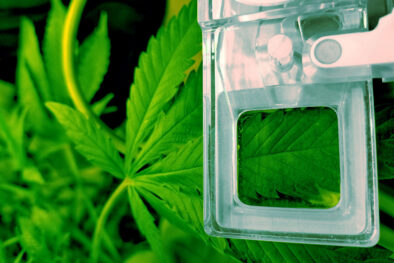 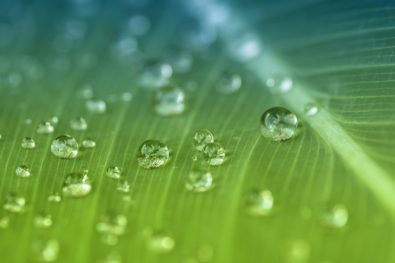 Water remained on the leave.

Transpiration in Plants: Its Importance and Applications 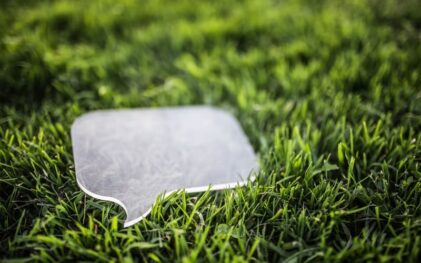 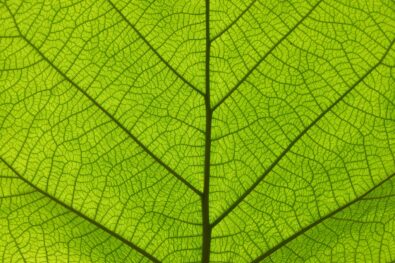